You are here: Home > REFLECTIONS OF MOROCCO PHOTO PROJECT by Julienne Gage 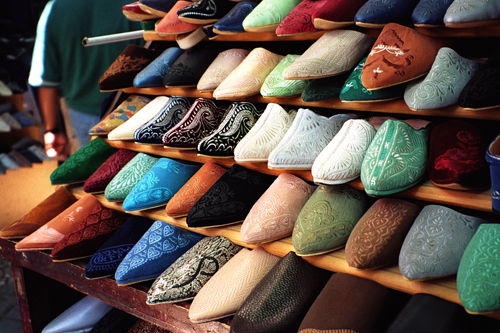 Following the Madrid train bombings of March 11, 2004, Spain’s Moroccan community experienced a massive backlash of xenophobia because many of the terrorists implicated in the attacks were Moroccans. In response, many Madrid residents  –both Spaniards and Moroccan immigrants– rallied together to condemn both terrorism and racist responses to it[the bombings?]. I asked a group of Spanish art therapy colleagues to show the photos I took of a typical marketplace in Tetuán Morocco, to Moroccan immigrants living  in Madrid so that they could reflect on and tell the world about the positive aspects of their culture. These were some of the responses they gave me. The Reflections of Morocco has been on exhibit several times in Spain. Each time, event organizers asked visitors to write down their own reflections on multiculturalism and immigration and enter into a dialogue during the event’s inauguration. To learn more about the history of the project, see the Backstory entry below, and please feel free to offer your own reflections. 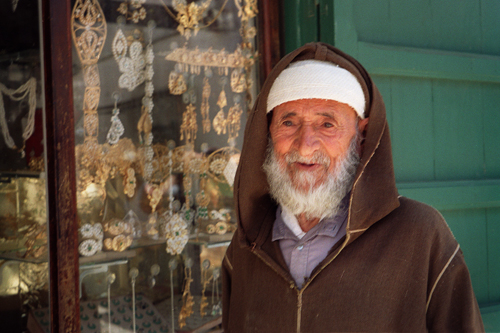 “Respect. Power. Teacher and wise in the ways of daily life. Giver of patience and security on the worried, tired and pessimistic streets.” – Zohra, age 35. Sociocultural mediator.

“He’s the friendly grandfather of every home. He brings happiness and serenity to the family and puts problems in perspective. He takes life one step at a time, and he gets along well with the grandchildren. To me he also symbolizes a generation of Moroccans who fought to the independence of their country but have never managed to enjoy it. I feel sad for these sweet elderly people, and each time I return to Morocco, another one of them has died. They are disappearing. They are so funny. When some of them see a group of girls in blue jeans go by they say, “Boys! What’s wrong with you? If I were young I wouldn’t let them escape!… ha ha ha…” – Aziz Allaouzi, age 37. Immigration lawyer and social worker. 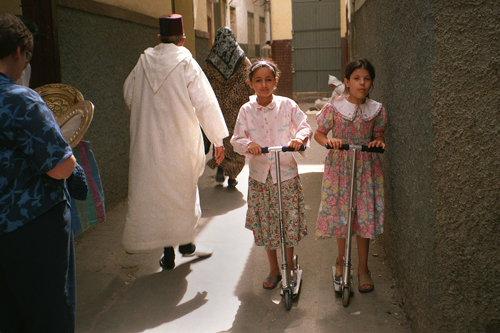 “Day after day, the girl shows her strength, intelligence and willingness. Her voice crosses through the walls to reach the street and fill it with history and justice.” – Yised Triana, age 32. Immigrant social worker. 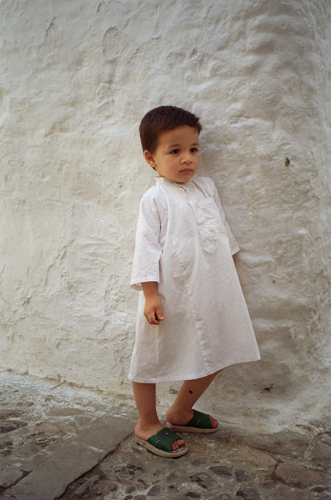 “Oh this poor boy! I see they just circumcised him (this is noted by the shape of the robe). Look at his sad face. What pain! He wouldn’t have understood anything that just happened to him. He looks so innocent dressed like that, wearing white – what purity. What a face. How beautiful.”  –Asked to remain anonymous, age 29. Wife and mother of Spanish-Moroccan family.

“Me yesterday. Me today. Me tomorrow. I will always need a mother who takes care of me, who hugs me, who accepts me as I am.” – Zohra, age 25. Sociocultural mediator. 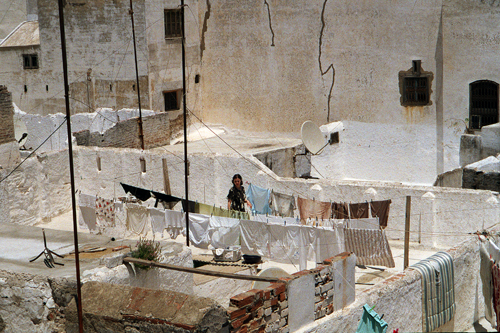 “These are the rooftops of very old homes. There are no tiles like there are here (in Spain). People in the midst of such misery don’t deprive themselves of satellite dishes. The houses are all painted white. The satellite dishes are double edged swords because they don’t always show people reality.” – Mina Binjuali,  age 32. Geologist.

“A genie’s bottle and a carpet. Stories and traditions have been passed from generation to generation on this relaxed space filled with colors and designs.” -Zohra, age 37. Sociocultural mediator.

“They are a little shy, they are curious, he’s going to make his move, aaah, he doesn’t care. I remember how my friends and I used to play on the street corner. Nothing’s changed.” – Yised Triana, age 32. Immigrant social worker. 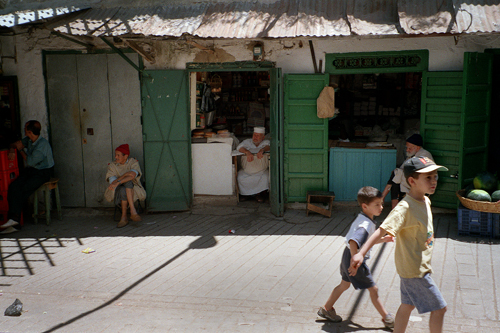 “Stores are a meeting place, especially when there’s unemployment. When you don’t want to be alone, it’s normal to go to a store in your neighborhood and pass the time talking to the shopkeeper or hanging around the door watching people pass by until someone recognizes you and stops to talk. Moroccan immigrants do that in Spain when they feel alone. They go look for a Moroccan business and then they spend the whole afternoon shooting the breeze with the owner.” – Aziz Allaouzi, age 37. Immigration lawyer and social worker. 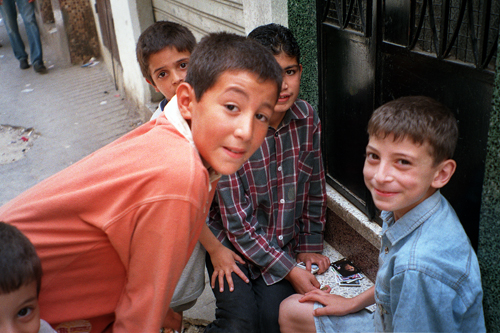 “Even if they don’t have much money, they always find a way to enjoy themselves and to share their dreams, which always inspires them to be more.” -Zohra, age 35. Sociocultural mediator.

“Look at those eyes. You can even tell they’re Moroccans from a distance. They’re the eyes of Moroccans, they’re special, they have a light and a strength that other eyes don’t have. They remind me of how my brothers were when they were little. The boy in orange looks like a Moroccan Christian. You can see it in his face. I don’t know why, but that’s the feeling I get.” – Asked to remain anonymous, age 27. Wife and mother of Spanish-Moroccan family. 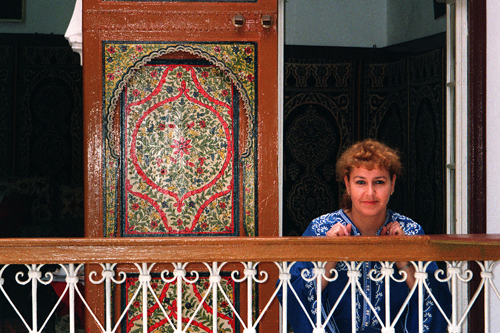 WOMAN BY THE DOOR

“These are authentic Moroccan doors. They open onto the patio of the house the same way they open into the courtyards of the palaces. Each door opens into another. This is a modern woman. She has colored and cut her hair. I’m reminded of the old houses of Sale, which is a city separated from Rabat by a river and is older (than Rabat). You can see the harmony of the colors.”  – Mina Binjuali,  age 35. Geologist. 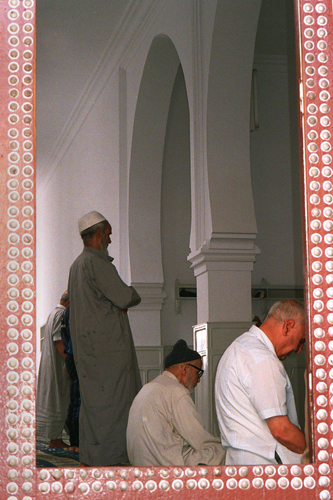 “A moment of worship. The men are praying – each one individually or in a group prayer. When you leave the mosque, you leave filled with peace and conviction. If you commit a crime, you regret it as soon as you enter the mosque. It purifies you. You leave with an urge to make peace, to make contact with others, to break down walls. We are all the same.” – Mina Binjuali,   age 35. Geologist.

THE BACKSTORY ABOUT THE REFLECTIONS OF MOROCCO PHOTO EXHIBIT

I took these pictures in 2001 on a trip to Morocco while I was enrolled at El País School of Journalism in Madrid. The only photography technique I knew at the time was to get as close as I could with my little camera. When I developed the film, I was surprised by the results and wanted to find a way to present them for some sort of social outreach.

In 2002, I moved to Miami to work as a reporter and the idea remained on the back burner. But in 2004, my friend Eva Gallego, a Madrid-based social psychologist told me that she had founded AcercARTE, an art therapy program for immigrants in Madrid. I wondered how the Moroccan immigrants would feel about reflecting on typical scenes from their homeland so I asked Eva and her psychologist colleagues to show the Moroccan community these photos and write down their reactions.

The timing of this project couldn’t have been better. In the midst of this project, the March 11th Madrid Train Bombing took place, and a large number of Moroccans were implicated. Suddenly the Moroccan community of Madrid was confronting a xenophobic backlash even though most of those immigrants outwardly condemned the act of terrorism. Madrid’s Moroccan immigrants needed to respond with something positive, so turning this project into a public exhibit created an opportunity to do just that.

In May of 2004, we displayed these photos with corresponding reflections from Moroccan immigrants at Madrid’s La Rueca Cultural Center to an audience that included Moroccans and Spaniards, as well as immigrants from countries such as Colombia, China, Venezuela, and Cuba.

It was wonderful to be able to talk in person with some of the Moroccans who had offered reflections to my photos. In the post-9/11 and 3/11 era, they felt happy to know that an American was showing some of the positive aspects of the Arab world, and I felt proud show openness and tolerance as an American.

That was just the beginning of an incredible dialogue about xenophobia and tolerance toward immigrants. Suddenly, immigrants of other nationalities began expressing their frustrations about xenophobia in Spain. This, in turn, prompted many Spaniards to express their irritation over stereotypes that their culture was racially and culturally intolerant. But the exchange quickly turned to a frank and peaceful dialogue in which representatives of the various countries could talk about the positive aspects of their culture and the efforts they made toward integrating or helping others to integrate. Many people also spoke of the nostalgia the photos provoked. “The photos reminded me of the markets in Havana,” “I remember a childhood in a poor community that was rich in tradition…”

This exposition showed me that the creative spirit of a project can be more important than the level of technique involved in its production. We managed to open a spontaneous dialogue where people of different cultures, races, and religions could fulfill the mission of AcercARTE – which was to bring people together.

Later that year, AcerARTE took the Reflections of Morocco exhibit on tour around Spain and finally put it on permanent display at a center called the School of Coexistence in Madrid. For two years, that publicly funded school became a place where Spaniards and immigrants could meet to offer each other language and culture classes, as well train public school teachers and social workers in multicultural outreach. The school was eventually shut down due to budget cuts, but the immigrants who participated in that first exhibit continue to work toward greater cultural tolerance in Madrid.

In 2011, I returned to Madrid to show my documentary LA GATA about an elderly, undocumented tango singer in Madrid who made a late-in-life comeback to her singing career in Miami in 2004 at the age of 78. I knew I had an audience in Madrid but needed a public space to show the film. Madrid’s Casino de la Reina Cultural Center in the heavily immigrant community of Lavapies said they would show the film if I could find a sponsoring non-governmental organization. The Ibn Batuta Sociocultural Asociación, run by Aziz Allaouzi and Samira Oukhiar, two of the Moroccan immigrants who participated in the exhibit, agreed to serve as that sponsor and handle publicity.

I arrived to the cultural center that night to find an audience of about three dozen people representing Morocco, Spain, Cuba, Argentina, Colombia, Israel, Venezuela, Uruguay, and the United States. Once again, the story of one immigrant and her compatriots in a foreign land inspired a dialogue on the struggles of immigrants to be accepted and appreciated for their contributions to the receiving country.

It is exciting to know that these creative projects inspire such a broad multicultural dialogue, and so I encourage those who view the Reflections of Morocco exhibit on my blog site to leave their own reflections.

Thanks for participating! Julienne Gage

Posted on September 30, 2011 by Gage in Documenting Immigrants